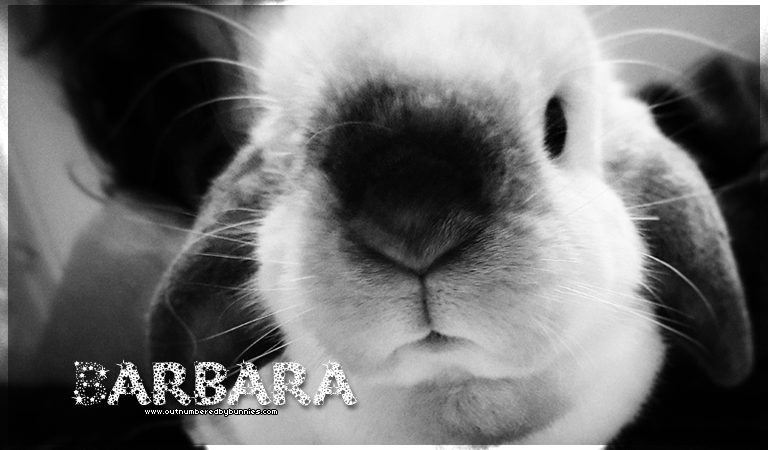 I’ve written about how we came to adopt Ned and Gingee, our first two bunnies, before. And Barbara, our rescue rabbit, has her own regular section on this blog! But I’ve never really talked about how she came to live with us, and her story.

The first thing about Barbara is that we don’t know too much about her history. We know that she is the softest of all three of our rabbits, that she loves apples more than anything, that after she’s had her claws clipped she needs to nibble your nails in return… but we don’t know how old she is. It’s strange to have a family member that we love so much and yet so know so little about her.

We first met Barbara in November 2016. Ned and Gingee had lived with us for over a year by that point. They fought all the time so lived separately – Ned upstairs and Gingee downstairs. We’d pretty much given up hope of bonding them.

Barbara was living at Pets at Home, with Support Adoption for Pets. I noticed her a few times when I went to buy hay or food. She had a sign up next to her cage saying something like: 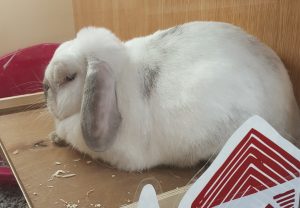 My name is Barbara.

I am a rabbit.

I have been in this store since March so the charity is trying to find me a loving home.

Who calls a bunny Barbara?! What kind of name is that for a rabbit? (It turns out it’s very good marketing! It got her noticed.)

She was this massive (compared to the boys), grumpy, sleepy floof. Easily noticeable.

But I absolutely did not want a third rabbit. We had Ned and Gingee and they needed a room each and were clearly never going to bond. We were at our limit.

So I kept on seeing her, hoping someone would adopt her, and going home again. I wanted her to have a home, but I didn’t really see that it needed to be our home.

I mentioned her to my husband, just in a passing text. “You’ll never guess the name of this rabbit that’s up for adoption!”

And, because he knows me probably better than I know myself, came back immediately. “Do we want her?”

… Um. I don’t know. I hadn’t really considered adopting her as a serious possibility until that very moment. Sitting in my office, I pushed my chair back from the desk and thought for a moment. “We’ll talk about her later,” I replied, eventually. “We’d need to find out more about her.”

So that evening, we sat down to talk about Barbara. What would we need to know? What should we take into consideration before making the decision whether to adopt her or not?

We decided that I’d go into the shop tomorrow and ask the questions. Find out a bit more about her, and then we’d make a decision.

I don’t know that I’ve ever been so nervous as when I went in to talk to someone about her. Some time in the last few days, my feelings about her had completely changed and I was suddenly petrified that she’d have been adopted. “That’s okay,” I tried to reassure myself. “I just want her to have a home. It doesn’t have to be with us.” I was lying to myself. Suddenly I wanted to get to know this big fluffy bunny much better.

I needn’t have worried. She was still there. Still big and fluffy and grumpy. And the staff were thrilled that we were asking about her.

Here’s what we knew:

Well, it wasn’t quite what we’d expected, but we certainly knew we could care for her. We were already taking care of Ned’s bad eyes, and wiping a few more bunny eyes would be easy enough.

My heart was breaking for this poor girl who had had such a rough time, when our boys had everything they wanted. How could we not pursue this further?

They suggested bringing Ned and Gingee in for a date to see if everyone got on. So, that weekend, the boys hopped into their cases and we drove over to properly meet Barbara for the first time! 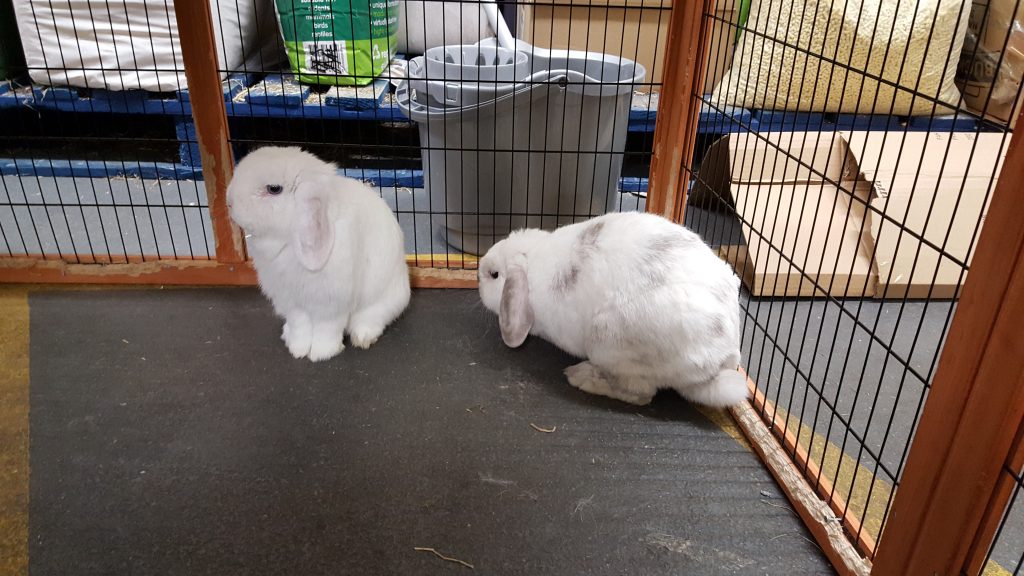 I won’t say it was all plain sailing. We didn’t all bond instantly. It took until April before all three rabbits were living happily together in one room, and Barbara came home on 12th December.

We’ve had some health problems, too. At her first vet visit, they noticed her teeth needed filing again, and we learnt that she’s not good with anaesthetic. She takes a very long time to wake up.

She developed some arthritis in her elbow. With medication, all of the problems related to this have cleared up, but we worried for a while that she might need one leg amputating.

We think she may actually be older than three. Eight? Maybe younger? Her bone density is very low, which is either a sign of being an old lady or due to malnutrition in earlier life. We hope she’s younger than eight as we want to have a long time with her! Now that she enjoys life, we want her to have a long one.

Barbara moved in with us on the day that a dear friend of mine passed away, and I had a difficult time adjusting. She loved my husband from the start, I think, but she and I didn’t bond immediately. After how easy it had been for me to bond with the boys, I felt awful. She was so skittish and not as playful as the boys, and it was a strange transition for us all.

But from the time I found out I was pregnant, Barbara became incredibly affectionate towards me. We spent a lot of time cuddling on my bed, just me and her. She groomed me and I stroked her and we’d fall asleep together. My husband would take her back to her room once I’d dozed off. (Yay for first trimester exhaustion!)

And the more confident she got, the more she and I bonded. I can honestly say that we’re very close now. She’s one of my favourite people in the world! How can I help it? She’s grumpy, demanding, so intelligent, very sassy, and knows what she wants. She’s just fabulous!

Look at my beautiful girl. That confident face! She has come such a long way. 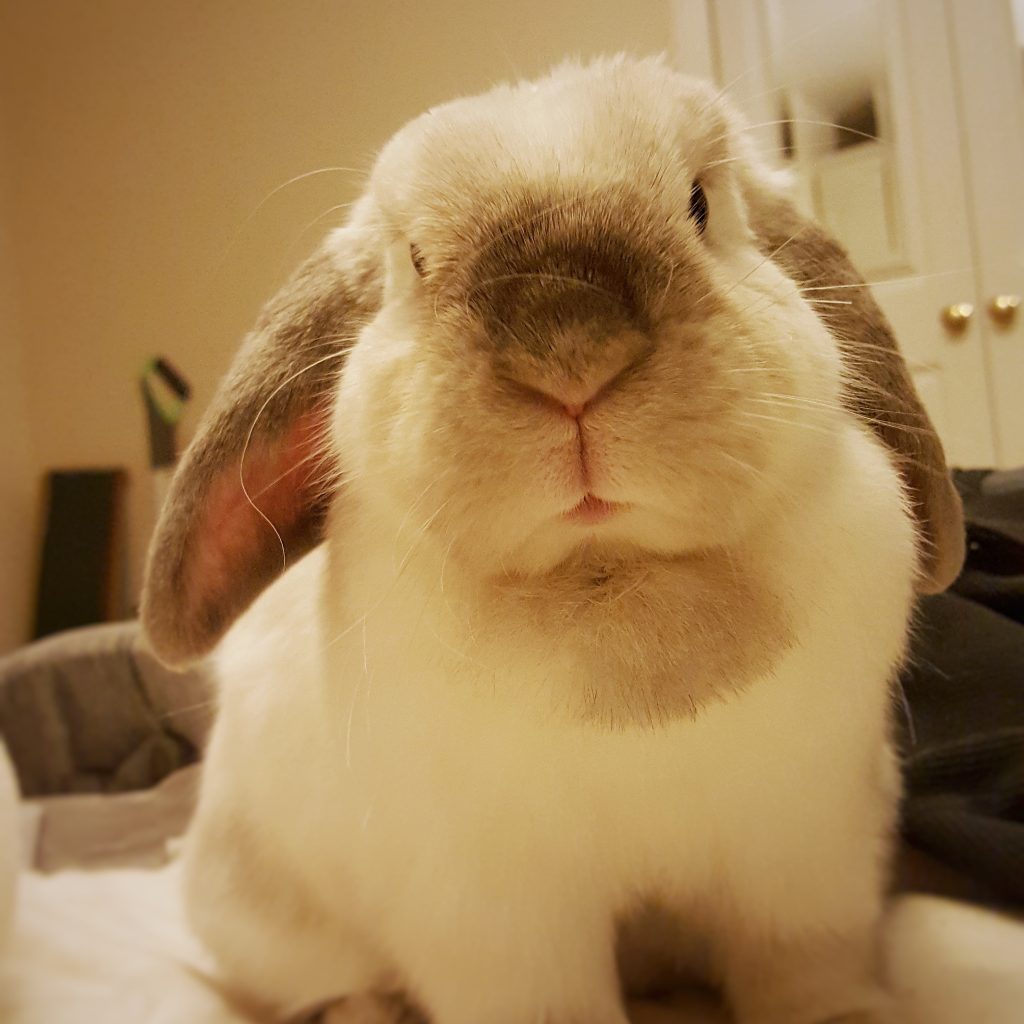 9 thoughts on “Barbara the rescue rabbit”