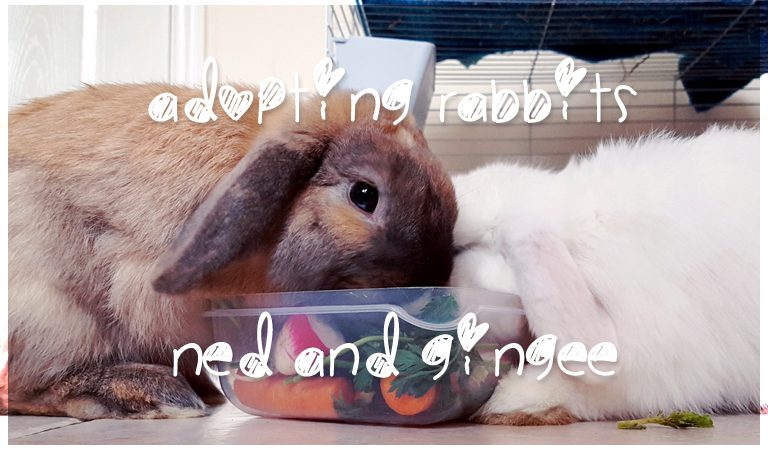 When my husband and I got married, we always knew we’d be adopting rabbits pretty soon.

There are a few times I can honestly say I really felt God intervening in my life. I may not have noticed it at the time, but looking back, I can really see that it was the case. Some of these times have been scary, some have been comforting, and some have just felt absolutely right.

One such time was just after we got married. We had talked about getting rabbits soon after the wedding, but had decided to wait a couple of months or so and settle in to life just the two of us first. And then, midway through our honeymoon, my husband turned to me and said, “Why don’t we go online and just browse some rabbits?”

So we did. We looked for local rabbits who needed rehoming. Probably two girls or a boy/girl pair, who needed a new home for whatever reason.

I’d heard about lots of problems with mini lops, so we weren’t looking for them.

And then I saw this little face. 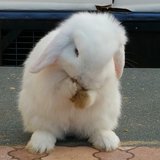 He was from a breeder. This wasn’t a bunny in need of a new home because of family allergies or divorce or anything like that. He was a baby. A mini lop. And his profile mentioned how attached he was to his littermate. His brother. Two boys, then. Oh, and they lived 50 miles away.

But he was mine. I just knew it. I bookmarked his page and kept going back to look at him, whispering his name to myself. Talking to him in my head. Hold on, little guy. If you don’t find a forever home before I get back, you can come and live with me.

When we got back from our honeymoon, his profile was still there. I bought a hutch. (Oh yeah, adopting rabbits meant outside rabbits back then!) It rained all weekend so we couldn’t put it together. I found myself saying things like, “Well, they can live inside until we get the hutch put together. Just so that we don’t miss them. We don’t know what the situation they’re in at the moment is like. We shouldn’t wait too long. If it’s bad, we shouldn’t leave them there. We need to get them home.”

I needed those two rabbits.

My husband went back to work on the Monday and I had another week off. We agreed that I would contact the breeder in the morning and we’d go and meet them after work, if possible.

I called the breeder at 9am. No answer. I left a voicemail and sent a text (We’ve seen Ned and Gingee online – are they still available?) and held my breath. And then, at 10.24, I still have the reply. Yes, today, come any time.

I felt almost embarrassed walking in to the breeder’s house. I wanted these two little guys so badly. So much that I almost felt we shouldn’t have them.

I wanted to feign indifference because it felt almost overwhelming, and I could barely bring myself to look as we were introduced to them, as we put them into their new carrier, took them to the car.

When we got them home, I just wanted to stare at them. Ned in particular. That little white bunny with those piercing blue eyes. It felt like I already knew him.

Obviously they never moved outside. They’re house rabbits now and always will be!

Gingee took to my husband very quickly, and Ned was mine. We learnt at a vet appointment a couple of days later that he was not a healthy little rabbit. That night, I stayed up watching him, stroking him, telling him that he was loved. Just in case anything were to happen to him, I wanted him to know that he was in a home where he was important and loved.

Nearly two years later, my poor little Ned has been through a lot. He’s so much healthier than he was. We’ve seen a lot of vets, tried plenty of medications not meant for rabbits, and know that he has some problems he’ll probably always have, but we’re doing well right now. There’s no reason why he won’t live a happy life with a normal lifespan. He’s surpassed every expectation anyone had for him. He’s neutered and lives happily with his brother and their  adopted sister Barbara (yes, we carried on adopting rabbits!).

But if he’d not been a house rabbit, if he’d not had so much attention so early on, if we’d not taken him to the vet so early… he probably wouldn’t be here with us now. We saved him.

He makes such a difference to my life as well. Ned knows when I’m sad or in pain, and he comes up to me to fuss me. He has licked tears off my face. He buzzes and squeaks happily when I’m around.

Gingee does the same for my husband. If I’m playing with them and he knows that his daddy is somewhere in the house, he won’t settle until he’s there for playtime as well. When my husband goes away, Gingee worries. He’s a little caretaker, the therapy rabbit who just wants to make sure everyone is happy and healthy.

Adopting rabbits was the best thing we ever did.