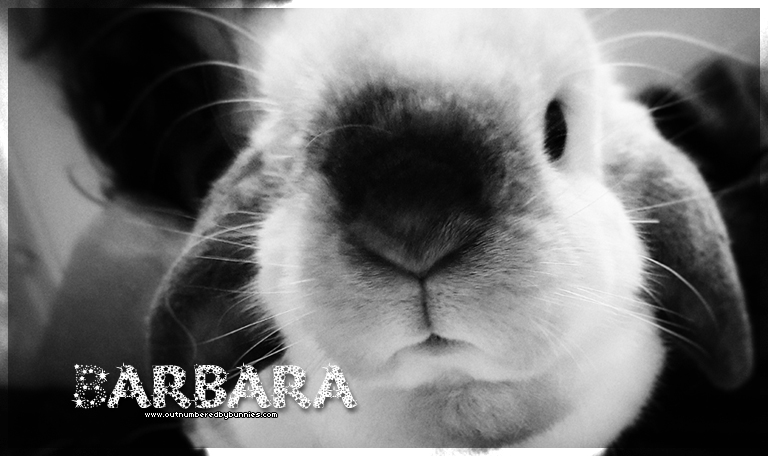 No #barbarablogs today, guys. My poor girl has been dealing with a bout of GI stasis and dental problems. She’s not been well enough to write anything herself. But, while she’s recovering, she’s asked me to tell you about what happened to her this week.

I’ve written about Barbara’s background as a rescue rabbit before. She didn’t receive any vet care until she was a few years old.

She moved in with us in December. In January we took her to the vets and found she needed some dental spurs filing down. Spurs are caused by teeth not wearing down evenly, and are little spikes on the teeth that hurt her cheeks or tongue. (Here’s a great page with lots of detail on rabbit dental issues.)

Obviously, if her mouth hurts, she won’t want to eat hard food. When Barbara first moved in with us, she’d put hard things like fenugreek cookies in her water bowl to soften them for a bit before eating them. She’s ever so clever!

But since she had her spurs filed down in January, she’d been absolutely fine.

On Saturday, she was absolutely fine. She and the boys were running around, wreaking their usual havoc. Eating plenty and going to the loo just fine!

On Sunday, she was a little quieter, but still eating fine in the morning. Then evening rolled around. Suddenly she didn’t want to come and have any pellets. She was eating tiny bits but definitely wasn’t her usual self.

We worried that it was because she’d been eating newspaper. (She does that sometimes.) We tried liquid food. Offered veg. In a rather desperate moment, offered a chocolate biscuit. (She ate that.)

She ate a little bit of hay and a couple of pellets. We called the emergency number for the specialist Ned has seen in the past, described her symptoms, agreed it sounded like the beginning of GI stasis, and they advised continuing to try for a little bit, keeping her warm and comfortable and bringing her in in a few hours.

I was up at 5am to check on her. I’d really hoped she’d be fine by then, but no luck.

My husband and I talked it over. Ned’s specialist is 50 miles away and I’m the only one in the house who drives. I could go into labour at any moment. If that happened, Barbara would be stranded 50 miles away, whereas if we went to our local vet, my husband could walk there and get her. By the time I’d got to the specialist, it would be the same time as our local vet opened anyway.

Local vet it is, then. I know they can deal with GI stasis.

She and I sat and cuddled and napped on the bed for a while after her dad had gone to work, and I kept on trying with food. She drank happily but really didn’t want to eat. 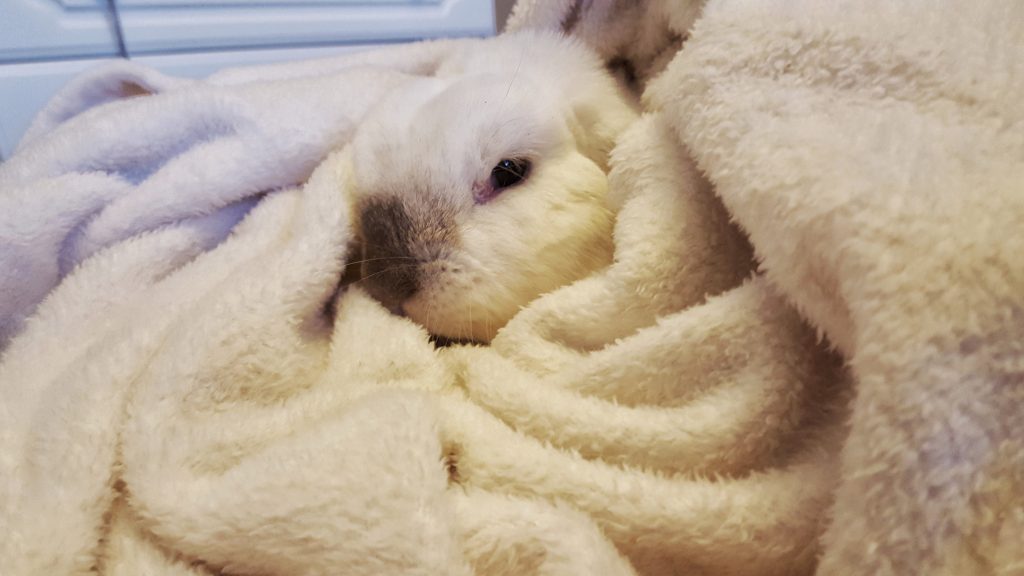 So, at 8am, I rolled up at our local vets, no appointment, ready to sit and wait with her for hours if necessary. No need – we were in by 8.30. Have I mentioned how much I love our vets?

Bonus: because Barbara has been going there since December, they had all of the medical history we know for her. They know she’s had tooth problems, they know she’s slow to wake up from anaesthesia, they know she hates liquid food.

The vet had a little look at her teeth (Barbara resisted) and said that they were probably causing the issue. But first we clearly needed to get the gut issues under control! So they took her in for the day. We decided we’d ideally have her home overnight so she could sleep in her own room, then go back the next day for the teeth.

By 2pm, she’d had fluids and some liquid food, as well as some fruit and veg that the lovely team had gone out to buy for her. She’d not gone to the loo yet but that’s more of a waiting game. There were gut sounds and we were cautiously optimistic – take that, GI stasis!

I went to pick her up in the evening, and she’d still not been to the loo. But the moment she got home and sat on the carpet, it all came out! She clearly just missed home.

We had a lovely evening, cuddling, eating a few pellets and watching YouTube videos. She still had her catheter in her ear, so we couldn’t leave her and the boys free-ranging overnight, unfortunately. So we put them all in their individual houses – she was not happy.

39 weeks pregnant. Woke feeling a bit crampy and like there was a bowling ball making its way downwards. Stay put, baby, until your big furry sister is better!

My husband had to put Barbara in her carrier before he left for work, because there’s no way I could have managed it. I let her roam about on our bed, but I needed to have her out of her cage, at least.

She was so lively, definitely much better than yesterday! GI stasis all gone. Enjoyed some pellets and some water, and we had a little nap together again before heading off to the vets at 8am.

I signed the usual consent forms and handed her over to them, after explaining how she’d been overnight. Went home, waddling like crazy. Crossed my legs to keep the baby in!

At about 2 o’clock, I rang to check on her, and she was all done with the dental surgery! As usual with Barbara, she was taking a long time to come round, though, so they asked if I could wait until more like 6 before coming to get her. Of course, as long as I get to take her home eventually!

The vet explained that her back left teeth had been rubbing at her and basically causing a mouth ulcer. Everything was filed down nicely though, and we were sent home with some metacam/loxicom, as well as a little “trick or treat” bag of veg that they’d bought for her.

And so we were home about 6.30, just in time for the trick or treaters. Daddy took trick or treat duty while we all sat in the living room. Barbara enjoyed some nice pear and a few pellets, and plenty of water.

And then back home to her brothers!

What a few days. Try and be kind to me for the rest of this pregnancy, please, Barbara?