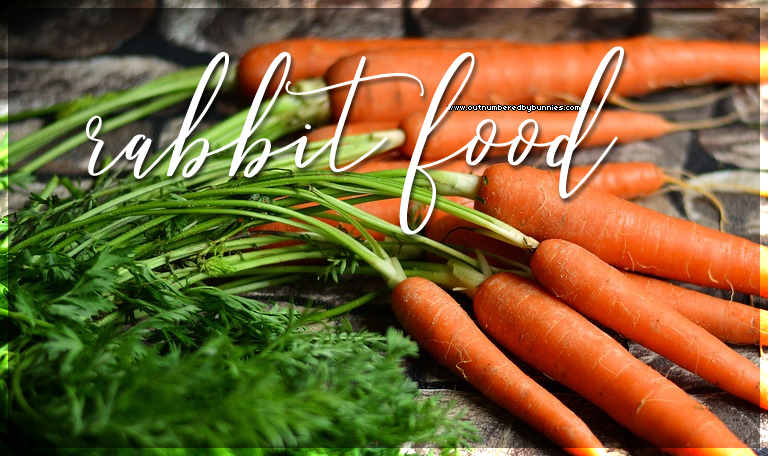 I see so many people talking online about how to manage rabbit food and the best diet for their bunnies. We’re not experts, but we’ve had three house rabbits for a while now, and (touch wood!) they have pretty healthy bellies.

Here’s what we do:

The pellets (what people think of as “rabbit food”) we feed are Science Selective. It’s generally thought of as being the best food available for bunnies in the UK. It’s not high in sugar or seeds, and there’s no chance that they can selectively feed (i.e., leaving the bits they don’t like!). In the past, we’ve also used Burgess Excel with mint, and the boys had Excel junior when they were babies.

For three rabbits, we give a handful of pellets three times a day. So they each get the equivalent of a handful per day. No bowls. We either hand feed them (as in, giving them the pellets individually) or put them on the floor/in boxes/among paper and they “forage”.

We buy Science Selective in huge bags and decant it all into a big red plastic bin that we keep just outside their room. They know it’s in there and are absolutely fascinated by the bin, but they’re not able to get into it! 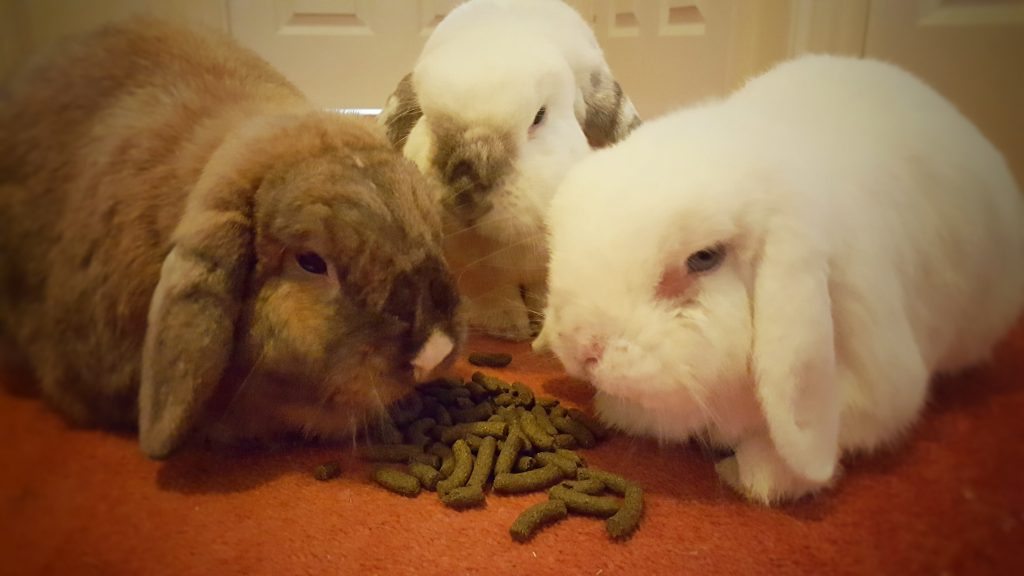 All rabbits are meant to have unlimited hay. It’s meant to make up the majority of their diet. It’s good for digestion and for keeping their teeth nicely worn down. We put out mountains of hay every couple of days, and they love it. They eat it, play with it, use it as a bed… hay is so important for them.

They also get fresh water every day. With three rabbits living inside, they drink a lot – we have six bottles between three bunnies.

I know that bowls are generally thought of as better and more natural for them. When they lived individually, that’s what we used. Now they live together and spend their days chasing each other round, and we found that they knocked the bowls over and got each other wet rather a lot. For now, bottles work well for us. I’d like to transition them back to a more natural way of drinking, but I don’t want the risk of damp rabbits!

Rabbits are meant to have a lot of greens. Our three particularly love rocket (arugula) and spinach. We don’t go overboard with the amount, as Ned in particular would eat them until he burst! We used to give him rocket as a treat after he’d had his medication when he was ill.

The greens on top of carrots are also coveted. This means I’m the crazy bunny mum who buys organic carrots for her rabbits, as since our local greengrocer closed, there’s no other way to get carrot tops round here.

Herbs are also popular with our three: mint and coriander are always a big hit.

Fruit is a bit more of a treat, and we don’t give it every day. Some of the favourites are:

Bananas are, oddly, not a favourite. Ned once found a banana in my handbag and ate half of it, skin and all, but if offered one, they’ll sniff at it and wander off.

Of course, we all need a little something extra. So many of the treats sold as rabbit food are really bad for bunnies though. We tend to stick with two in particular: Fibafirst sticks, which are hay-based, and Fenugreek Crunchies, which they love.

When Barbara and Gingee get a Fibafirst or a fenugreek cookie, they do an excited little hop and run away with it so that no one can steal it. Ned’s more trusting, and will even let you feed it to him from your hand. But all three of them absolutely adore those two.

Of course, they’ve all had some treats that they weren’t supposed to – but I think that might be something for Barbara to talk about later!

21 thoughts on “Rabbit food – our favourites”