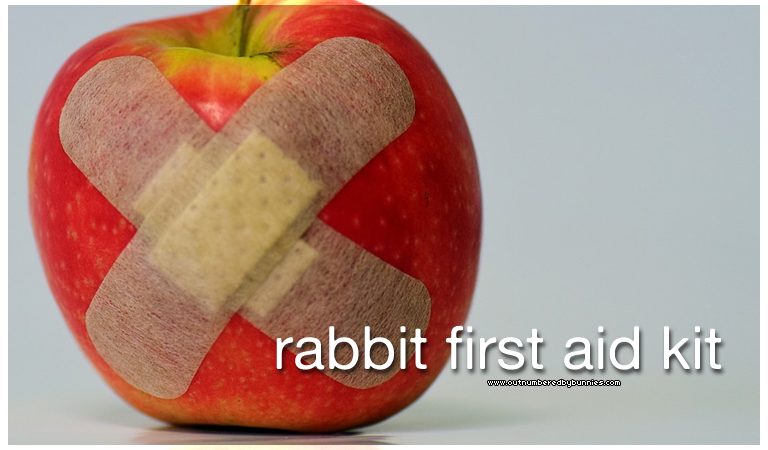 Over the years of being bunny parents, we’ve had quite a few occasions where we’ve needed our rabbit first aid kit. Ned and Barbara both have special needs, and Gingee recently had his own brush with illness.

It makes life so much easier to have a little rabbit first aid kit in the house already if they get sick.

For external injuries and illnesses

Soft flannels – we use these to wash Barbara and Ned’s faces regularly. They both have malformed tear ducts which get very leaky, and if we don’t keep on top of it, the fur on their faces gets all matted. Flannels are also really useful if anyone gets injured during nail cutting and there’s any bleeding.

Cornflour – putting this on anywhere that’s bleeding will help to stem it. We’ve had a few pulled out claws during trimming, and we just put the flour on there and wrap it in a towel.

For feeding and digestion problems

Critical care liquid food – we buy it from Amazon.

Bowls and measuring cups that you can use to mix the critical care. It comes in a powdered form, and you’ll need to have the right amount of water to mix it up.

Clean syringes – no needles, obviously! Sometimes they won’t take the critical care directly from a bowl and you’ll need to syringe it in.

Baby spoons – some of ours are more eager to take from a spoon than a syringe. We’ve designated some baby spoons to be bunny spoons instead!

Infacol – this is a baby gas medication, but it works really well when a bunny is feeling a bit bloated. We tend to use it as a first line of defence, and with both Ned and Barbara it’s pulled them out of stasis before we got to the vet stage.

Your emergency vet’s phone number – also easily accessible. Chances are, bun will get sick or injured out of hours!

A carrier – if possible, one that can be clipped into your car using the seatbelt in case you have to travel a longer distance without a second person to hold it. We tend to line the carrier with hay and put a toy in there.

Bunny nail clippers – keep their claws quite short! Longer claws are more likely to cause injuries in other buns, and will also mean that bun walks on their heels, running the risk of sore hocks.

Baby nail scissors – we use these to keep the fur on Ned and Barbara’s faces nicely trimmed. They’re also really useful for the odd occasion when sticky things get caught in fur, or if there are any matts that need trimming.

And that’s mostly it! Our rabbit first aid kit has saved us all a few times before now. I hope you’ll never need it, though!