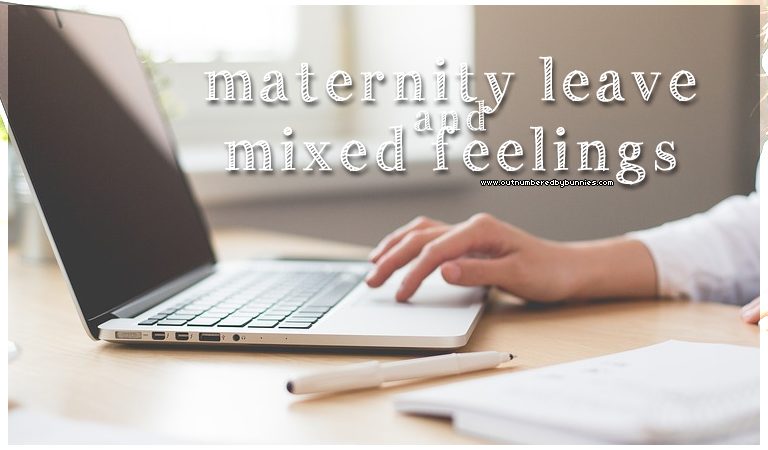 I started writing this post last night, the day before my maternity leave started, and finished it today. I’m now officially on leave.

So, I’ve worked since I was 16. With the exception of a bit of time at uni, when I was doing enough hours there that it just wouldn’t have been feasible.

I’m not giving up my job. I intend to go back after taking some maternity leave – we’re saying a year right now, but I haven’t set that in stone. As this week has progressed, the thought of not being there is lying heavily on me and I’m making it fairly clear to everyone that I don’t have to commit to how long my maternity leave is going to be, remember. I might choose to come back after a few months.

It’s important to me that I’m here at home with the baby at first. I’d like to breastfeed (for the cost, if nothing else!) and to be honest, I’m also a little burnt out at work and do need a break. That’s why I’m starting my maternity leave at “only” 34 weeks pregnant. (Also I’m really struggling to sit at my desk these days!) But I think I will always need to do some sort of paid work, if only for my own self-esteem. And the mortgage.

It may sound a little sad, but my job is a huge part of my identity, and I’m struggling a bit with the idea of not working.

I feel rather unprepared for looking after a baby. I’m good at my job. I’ve been very proud of the things I’ve worked for and achieved in my career so far. I’ve got a master’s degree in my area of expertise, and have spent the last six or so years gaining experience and knowledge. Our team have won awards. I feel like I know what I’m doing at work. I’m in control.

But I have no experience with babies! I hear that lots of women do struggle with feeling like they’re not them, they’re just Mummy now. I like the idea of being Mummy, obviously, and I do love this little baby fiercely. But I also like being Lucy. Lucy is pretty cool.

Some of this is compounded by the fact that the average age of someone doing my job is 28, I learnt recently. I’m about to turn 30. Going back I’ll be not only at a disadvantage due to taking a break but also as I’ll be older.

Obviously there are lots of people doing my job or similar who are over 28 – it’s just an interesting thing to consider.

I work in PR/communications, by the way. When you picture someone doing that, you probably picture a bubbly blonde 25-year-old looking immaculate, right? I’m not that. I’m a slightly awkward, not-at-all-polished, nearly 30-year-old who doesn’t walk in heels and still sometimes hesitates before making phone calls. But I have an eye for detail, I’m a good writer and I learn fast. I remember everything. I’m damn good at what I do. I’m just afraid of being pigeonholed for being “older”.

It’s also a time of lots of change where I work, and I won’t be there for that. In one way, that’s really good – they can sort it out and I’ll just hop back in nicely when it’s done. On the other hand, I won’t be around to see what happens. I’ll probably go back to a slightly different job, new colleagues and things will have changed. (I’m not that great with change!) I’ve seen that there is a plan for next year and I’m mentioned in it, which is reassuring.

I feel like I’ll have to prove myself again when my maternity leave ends, and that’s a bit sad.

(Do note: I haven’t been told any of this by anyone in management! It’s just how I’m feeling.)

Obviously I know I’ll be losing a lot of independence when the baby gets here anyway. I feel that already. I can’t just say, “Oh, I’d like to go to Manchester!”, hop in the car and drive 100 miles to go shopping. It’s too tiring. I’m tied to the local area and that’s been a tough transition as I used to travel around a lot.

But the thought of losing some of my financial independence while I’m on maternity leave is scarier still.

I’ve worked and been able to put money aside for a long time. Losing that independence and stability is pretty scary to me. Going from two salaries to one is a weird transition. We have some money set aside, but that won’t last forever. We have financial commitments – a mortgage, bills, three rabbits who rely on us.

And, while I trust my husband, it’s a strangely uncomfortable feeling knowing that I’ll be financially dependent on him while I’m on maternity leave.

I admit that I don’t have that many friends. I used to have more, but it turns out that getting married and starting a family can cause some people to pull away very sharply. But at work I do have friends.

One of my colleagues passed away in December. Losing him was so tough. It feels a bit like a family and we band together and have supported each other through some rough times.

I know they’ll still be there, not a million miles away, and we’ll keep in touch, but I’ll be losing some of that valuable social contact.

I cried a bit as I was driving away. It was a good thing – I felt so loved by everyone today. But I’m also going to miss them!

Taking some time for me and my family

But, on the other hand, I’m excited for this new adventure to begin and I’m excited to be able to take time to focus on my family.

I’m grateful that maternity leave and maternity pay are legal rights for me in this country. I know lots of women would be envious of the opportunity my family has here.

And I’m quite excited to meet this baby. (Just, I have loads to do first. Stay in for a while more, baby!)

I can’t be the only one who’s felt conflicted about maternity leave, can I? What was your experience?