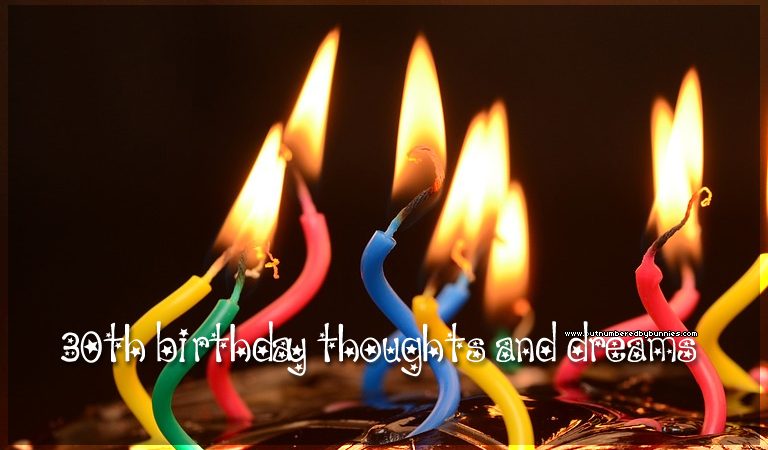 Friday was my 30th birthday.

It’s strange, I’ve never really been one to get too upset about birthdays, but I did feel rather wobbly on Thursday night and Friday morning. I could always put it down to pregnancy hormones, I suppose, but quite apart from that, I think there’s something about 30 that does make you think.

It’s the kind of age that you think about  and have ideas of where you’d like to be. I mean, obviously this varies from year to year. Last week, I was fairly sure I’d be in pretty much the position I was in on my 30th. But when I was younger, I had all these ideas of how life was going to work out.

Some of them have happened and some haven’t.

What I haven’t done by my 30th birthday

Let’s see, some of my dreams were:

But in general, it’s best to focus on the good. And there is a lot of good in my life.

What I have done by my 30th birthday

How do I feel now?

So, a couple of days after my 30th birthday, and having experienced a few days of actually being the scary age, I feel okay about it.

On my actual birthday, my husband brought me breakfast in bed, and then we played a nice competitive game of Scrabble before getting on with the day.

I spent the day with my mum, where we developed an unhealthy addiction to watching Yummy Mummies on ITV – seriously, we went through three episodes in one afternoon!

Then my husband and I went to my favourite restaurant that evening to celebrate, and ate ourselves absolutely silly. Probably our last chance for a night out before baby! And we need to save the pennies now. But it was nice to celebrate and spend an evening together, even if it did end with us both feeling uncomfortably full!

And then I rounded off the day with rabbit cuddles and a long candlelit bath, just me and baby and a book. It was all very low-key and relaxing, which is what I need right now that I’m approximately 7536 weeks pregnant!

To be honest, it feels absolutely no different to being 29. I’m not sure what my wobble was about!

Have you felt like this over a milestone birthday? What happened?